Check out the film Alaska Airlines executives won’t want you to see. U.S. Representative Adam Smith (9th District) said: “I grew up in the SeaTac area, my father worked in the SeaTac area — he was a ramp serviceman for United Airlines, where he got decent wages and benefits at his blue collar job. That enabled me to pursue my hopes and dreams, and that’s what I want for everyone in society as well. Equality of opportunity — a chance at creating that middle class life and I’m very worried that we’re losing that. That’s why I’m supporting SeaTac Proposition 1 – to bring back decent paying jobs at the airport and give thousands of our region’s families a fair shot at success.” END_OF_DOCUMENT_TOKEN_TO_BE_REPLACED

SeaTac – August 27, 2013: SeaTac voters and employees at Sea-Tac Airport say they are not surprised multinational airport corporations are back in court trying to block residents from casting their votes on SeaTac Proposition 1 this November.  SeaTac Proposition 1 would inject millions of dollars into the local economy and create good middle class jobs at the airport and related industries.

Yes! For SeaTac supporters say they are planning to appeal a King County judge’s order overturning King County and the City of SeaTac’s certificates of sufficiency for the SeaTac Good Jobs Initiative, also known as SeaTac Proposition 1.

Earlier this summer, King County Elections, the SeaTac City Clerk and the SeaTac Petition Review Board all agreed that SeaTac voters had turned in more than enough valid signatures to put the initiative on the November ballot.  Determined to stop SeaTac voters from casting their ballots, Alaska Airlines and the Washington Restaurant Association went back to court.

Yesterday afternoon Yes! For SeaTac submitted another 250 petition signatures from SeaTac voters, pursuant to SMC 1.10.140(F), which specifies that supporters have ten days in which to amend the petition by filing additional signed petitions.

The “Good Jobs” initiative was signed by more than 2,500 petitioners in SeaTac earlier this year and in July the SeaTac City Council voted unanimously to send the citizens’ initiative to the November ballot.  Big airlines, rental car companies, the Washington Restaurant Association and other multinational and overseas corporations have already contributed close to $250,000 to overturn this citizen-led initiative, attempting to maintain a rigged system that benefits their own bottom line at the expense of hard working SeaTac families.

SeaTac  – July 19, 2013: SeaTac voters and airport workers say they are not surprised Alaska Airlines and the Washington Restaurant Association failed their legal attempt to block the SeaTac City Council from sending the Good Jobs Initiative to voters later this fall. Voters and community leaders continue to question the corporations’ motivation in blocking a popular citizen initiative that will give workers in and around the airport the opportunity to make ends meet and get ahead.

Alaska failed to convince the judge to order the SeaTac city clerk to not transmit the citizens’ initiative to the SeaTac City Council on July 23rd. END_OF_DOCUMENT_TOKEN_TO_BE_REPLACED

“I’m appalled that Alaska Airlines is trying to stop SeaTac citizens from being able to vote on the good jobs initiative. What are they afraid of? Why don’t they want to share the success of the company with me and my community?” asked Chris Smith, a SeaTac resident and worker at Sea-Tac Airport. END_OF_DOCUMENT_TOKEN_TO_BE_REPLACED 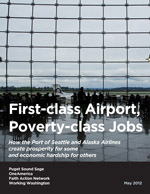